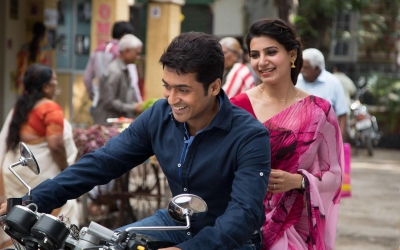 Dr. Sethuraman (Suriya) is a reputed scientist and watchmaker who lives with his wife Priya (Nithya Menen) and newborn son Mani in a mansion with a laboratory. In January 1990, he invents a watch using which a person can travel back and forth in time for a maximum of 24 hours. His evil twin brother Athreya (Suriya) tries to take the watch and kills Priya in the process. Sethuraman escapes with Mani and boards a train. Before Athreya arrives, he hands Mani to a passenger named Sathyabama (Saranya Ponvannan) and pleads her to save his son. Athreya kills Sethuraman and is seriously injured in an attempt to escape. Sathyabama's father (Girish Karnad) is against her decision to save Mani, and she leaves with him for Chennai to honour the promise given to Sethuraman.

26 years later, Mani (Suriya) becomes a watchmaker who considers Sathyabama as his biological mother. A paralysed Athreya wakes up from coma and decides to find the watch; he hopes to go back to 1990 and save himself from the accident. In a series of incidents, Mani finds Sethuraman's watch and explores its powers. Using them, he manages to impress Sathya (Samantha Ruth Prabhu), his client who hails from Sathyabama's native place Gopalasamudram. Athreya's close aide Mithran (Ajay) issues an advertisement offering five crores to the one who finds Sethuraman's watch. Including Mani, many prepare the duplicate of the watch and submit them. But Athreya spots Mani's design accurate and kills him, thereby gaining possession of the watch.
Athreya is shocked to know that the watch can only help him travel back and forth only for 24 hours and decides to revive Mani. Mithran places the watch on Mani's right hand and leaves. Mani wakes up next morning and is shocked as he wore the watch on his left hand. He travels back to last night and secretly follows Mithran. Athreya predicts this and manages to fool Mani with Mithran's help that he is Sethuraman who survived from Athreya as a paraplegic. Mani learns from Sathyabama that Sethuraman left him in the train and faced Athreya in another compartment.
Mani leaves with Sathyabama for Gopalasamudram and unites her with her estranged family. He also comes to know that Sathya is Sathyabama's niece, and the duo fall in love. Athreya arrives with Mithran and convinces everyone including Mani that he is Sethuraman and that Athreya is dead. Sathya learns about Athreya's identity later and tries to reveal it to Mani. But, Athreya manages to fall from a staircase and Mani, unaware of the reality, travels back in time and saves him. Sathya forgets about Athreya's identity and assumes that he is Sethuraman.
Mani learns from Mithran that his father is going to die soon and wishes to see Priya for one last time by traveling back in time to 1990. Mani modifies the watch and tests it, which reveals the truth about Athreya's identity. He tricks Athreya to tell about the date and time of Priya's death and gives him a fake watch. Mani uses the original watch to travel back in time to 1990 and Athreya accompanies him by touching the real watch in use.

In January 1990, Sethuraman and Priya spot the modified watch on their baby's hand. Initially joyous, Sethuraman senses danger; he feels that Mani returned to a toddler's age as they may not be alive when he was able to speak. Athreya, now young and healthy, attacks Sethuraman to find the watch. Sethuraman and Priya escape with Mani, and Athreya accidentally kills Mithran. Priya and Mani hide in a room, as Athreya faces Sethuraman in the garden. Sethuraman freezes the time and lays Athreya before a bullet, thus killing him. He then flees with Priya and Mani and boards the same train. They meet Sathyabama and agree to teach science to children in a school constructed by her father in Gopalasamudram.