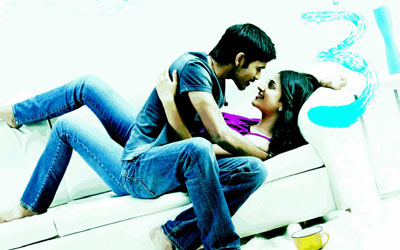 The story opens with the death of Ram (Dhanush). His wife Janani (Shruti Haasan) realizes that her husband did not die naturally, as she finds his room stained with blood spatters. She recalls memories from when they first met and the story starts with a flashback when Ram and Janani were 12th grade students.

Ram is a rich happy-go-lucky guy. He sees Janani and has a crush on her straightaway. He begins to follow her around with his friends Senthil and Kumaran.

When Janani reciprocates his love, she is stopped by her poor family. When Janani's mother tells her that they are moving to America, Janani burns her passport so she can stay with Ram. She is then disowned by her family by her mother and she lands up at Ram's door. The two get married with Ram's father's help and lead a happy life.

The story then returns to reality with Janani finding a suicide letter in Ram's coat, and after reading it, she asks Senthil about his death. Senthil tells her the truth about Ram, that there were two sides to him. After Janani had told him she was leaving for America, the same night his best friend Kumaran had also planned to leave for Singapore. Ram couldn't take all this pain and went for a jag, which was when Senthil had realized that Ram was suffering from bipolar disorder.

If something positive happened, Ram would jump in joy, but if a tiny negative thing happened, he wouldn't be able to control his rage. Senthil explains that once when he told Ram about his disease, Ram smashed a glass bottle on his head. Ram escapes from the house and while walking on the road, suddenly hit his head on a vehicle. After that accident, Senthil couldn't see any other strange behavior from him. Ram agrees with Senthil to go see a doctor. But he rejects medications thinking that Janani would know about the situation.

He loves her very much, and he didn't want to see her in tears. As a request of Ram, Senthil stays at Ram and Janani's house for few weeks, in case the situation becomes dangerous and if Ram tried to hurt Janani. Once, Ram tried to kill Janani during her sleep but was luckily stopped by Senthil.

The story moves forward to one evening at a nightclub, where Ram gets into a fight with a guy who misbehaves with Janani. Ram takes Janani to their car and sends her home. After she leaves, the guy who misbehaved with Janani shows up with his friends and attacks Ram and Senthil. In the course of the fight, Ram hits his head against the hood of a car. His medical situation is worsened as a result. He begins to experience bouts of rage. Owing to this, Ram manages to defeat the attackers. Meanwhile Senthil injects Ram with a medicine the doctor had prescribed in case of an emergency, thus sedating him and dissipating his rage.

On another day, while Ram and Senthil are in the car, Ram suddenly bashes Senthil's head against the steering wheel, rendering him unconscious. Ram says his last words to his friend, "Sorry dude, you have done so much for me" and leaves the car in order to and go see Janani himself.

He remembers all the beautiful memories from their young age, and the ending takes onto the final scene of Ram's life, as he goes to Janani's bedroom and watches her sleeping. He tries to control his emotions and kiss her for the last time and suddenly he hallucinates seeing a young girl saying "Either kill her or you die". He immediately gets away from her bed and goes to his office and writes a suicide note.

He sees visions of many people in front of him crying and laughing. To avoid causing further harm to Janani, he picks up a knife and slits his throat, and kills himself, saying his final words "I love you, Janani". The film ends with Janani wailing in grief, as she learns her husband's fate.