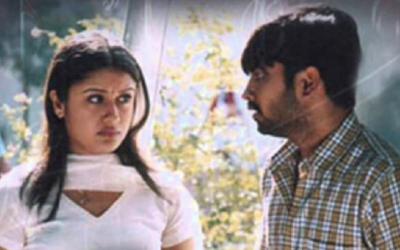 The movie begins with Kadhir (Ravi in Telugu version) (Ravi Krishna) on his way to work. People stare at him and laugh behind his back as he travels to his office. He appears distracted throughout the day and even instructs his assistant to postpone an important meeting with a big client. He then waits for someone at Marina Beach with a bouquet of flowers. His best friend, Lakshmi (Suman Shetty) sees him and asks him whom he is waiting for. Kadhir explains he is waiting to meet his girlfriend, Anita (Sonia Agarwal) for their date. In flashbacks, we are shown how Kadhir first met Anita.

Kadhir belongs to a lower middle class family, living with his parents and younger sister in Rainbow Colony in Chennai (Telugu version as Brundavan Colony in Hyderabad). He is perceived as a good for nothing person as he skips classes, fails in exams, and gets involved in fights. Kadhir believes that his father (Vijayan) (Chandra Mohan in Telugu version) hates him and often quarrels with him, even threatening to leave the house, only to be persuaded not to do so by his mother (Sudha). Kadhir's life changes when a once well lived family moves into the same colony due to loss in business. Kadhir is attracted to the daughter of his new neighbour, Anita. Although he tries to woo her, Anita treats him with disdain. One day, Kadhir confesses to Anita that he loves her. He tells her that having always been ridiculed, he found respite in the fact that she at least bothered to look at him. He promises to wipe her thoughts out of his mind, as he is not right for her.

Despite himself, Kadhir continues pursuing her. Anita realizes that Kadhir is not such a useless fellow when Lakshmi tells her that he has seen Kadhir dismantle and assemble a motorcycle within minutes each time they steal a bike to get drunk. Anita takes Kadhir to a Hero Honda dealer and asks them to give him a job. He is promised a job if he can assemble a bike. Initially, the lethargic Kadhir is disinterested and gives up the task. Anita takes him to the washroom and slaps him before revealing that she has fallen in love with him. She then tells him that they can only be together if he gets a proper job and gets his life straightened out. Kadhir then demonstrates his skill in motorcycle assembly, securing a job with the dealer.

Later that evening, Kadhir plans a treat for his friends. However, Anita confronts him and makes him break the good news to his parents first to get their blessings. However, Kadhir's father berates him as usual for getting a job instead of completing college. Then later at night, Kadhir overhears his father telling his mother how proud he is of their son since getting a job at such a prestigious company is not easy. The only reason the father did not openly praise Kadhir is because he feared his son might misjudge him for giving him respect only now that he is earning money for their household. Only then does Kadhir realize his father's love for him and weeps in joy. The intimacy between Kadhir and Anita is discovered by her mother and she refuses to allow them to continue dating even as Kadhir's father tries to persuade her otherwise. Anita's family is heavily indebted to another Northern Indian family that has been supporting them since Anita's father suffered losses in his business. Anita's parents want Anita to marry the son of the family that has helped them.

Anita escapes her home and meets Kadhir in a tourist place near Thekkady in Kerala and they end up in a hotel room. Anita reveals that she has made the biggest decision of her life by deciding to make love to him, as he should not regret falling in love with her when she marries the man her parents chose. Though stunned by her decision, Kadhir goes with her plan and the two consummate their love. The next morning Kadhir and Anita argue when Kadhir says he wants Anita to live with him, while Anita accuses him of being attracted to her only because of the sex. They continue arguing as they exit the hotel. While crossing the road, Anita is knocked down by a truck as a helpless Kadhir watches. Kadhir is also hit by a speeding vehicle. Anita dies on the spot and after sadly returning to Chennai, Kadhir tries to commit suicide only to be helped by a group of nuns. Kadhir then hallucinates about Anita's spirit coming to him and advising him to live life to the fullest. Back in present day, it is revealed that Kadhir has become very successful person in his life but has remained mentally damaged since Anita's death. He still believes that she is alive and always imagines talking to her. The film ends with Kadhir talking to himself at the beach, thinking that he is talking to Anita.