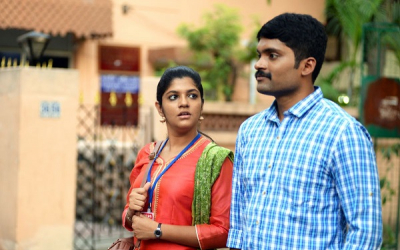 The film starts with an orphaned boy, Sathya, getting framed by the employer for the murder of his wife and is sent to juvenile. He befriends the warden who helps him secure the sub inspector job.

Sathya remembers what his warden taught him and stays honest in his profession. Unlike the other policemen at his station, he refuses to be involved in bribes and is made an outcast. One day, Sathya helps a writer who is beaten by his corrupt inspector, Gunasekaran. Thinking that Sathya is trying to become a hero by making him look bad, the inspector plans to shame Sathya. The inspector then arranges for Sathya to shadow a dangerous gangster. While shadowing the gangster, he loses his gun fully loaded with 8 bullets. The inspector gives him one day to find his lost gun or face disciplinary action.

With the help of a reporter friend, Meera, Sathya nabs the boy who pickpocketed his gun but the boy has sold the gun. The guy who bought the gun attempts a robbery and in the process he accidentally shoots and kills a little girl. Meera, in danger of losing her job tells her superiors about the case, it goes viral, and Sathya is suspended from duty. Sathya hides from police as he will be arrested, and is tracked down by Pandian, the new handler of the case, Pandian says that if Sathya was a real policeman he should never stop searching, which causes Sathya to join him. Meanwhile, one of the robbers tries to buy his girlfriend a necklace for her birthday and takes all the fresh notes available, despite the boss's opposition. In the jewelry shop, he is exposed as the police kept track of the serial number of the fresh notes. He escapes the arrest and goes to get his share. After a confrontation with the boss he tries to steal all the money and the leader shoots and kills him. The remaining two dispose the body. The second robber fearing he also will be shot dead by the boss, contacts police. When the police attempt to arrest the boss with a ploy the boss shoots and kills the second robber and made sure there is no one left to connect him with the robbery.

Sathya meets an old police man, Krishnamurthy, who got suspended for letting a terrorist slip away as a constable. It turns out that Gunasekaran accepted a bribe from the terrorist and let her go, but this has already ruined Murthys profession. Sathya talks to Murthy about life and how things have changed. After this, Murthy sees the man who sold him the gun and leaves. Murthy kills him with the same gun when he follows Murthy to a restroom. However we learn that Murthy is actually the leader of the robbery and he kills the officer who didn't sanction his Provident Fund. Sathya, now looking for clues in the murder, finds Murthy's application sanctioned and goes to his house to give it to him. However, Murthy's son tells him that the application got sanctioned earlier and Murthy gave the money to the family, by connecting the murder of the guy who sold the gun and Murthy's son's statement he figures out that Murthy is the robber and the boss. Meanwhile, Murthy follows Gunasekaran to a bank and attempts another robbery and kills him, after which he throws the money on the street. When Murthy returns home he finds out that the police have surrounded him. Pandian takes Murthy's grandson hostage and there is a confrontation in which Sathya walks out with his gun . He later tells the investigation board that Murthy shot Pandian dead and Sathya had killed Murthy in self-defense. Sathya is given his job back.

As Sathya drives with Meera, she tells him that he should not feel bad for Murthy, as he was a bad person. And we are shown what actually happens in that room. Pandian with his gun on Murthy's grandsons head slips, and a shot is fired. Murthy in shock, shoots and kills Pandian, but it turns out that Pandian missed and did not hit Murthy's grandson. Sathya grabs Murthy and fights him, but cannot hurt him as he feels sorry for him. Murthy stands up and grabs the gun and tells Sathya to shoot him. He then explains that he did not tell his family about his cancer because he heard the family speaking why god didn't take him instead of his wife. He then says he robbed the bank for them and that he wanted to live his last days as a king. Murthy also says he did not mean to shoot the child and breaks down. Murthy grabs Sathya's hands, puts the gun to his forehead and says he doesn't want to put the family in shame by going to prison then shoots himself dead with the last bullet when Sathya hesitates.

After this flashback, at a stop light, Sathya sees the employer that framed him, on the side of the street, and the movie ends.