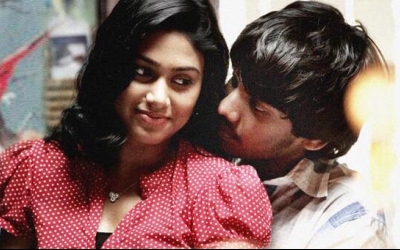 The plot revolves around Karthik and Shwetha, who are college mates from upper-middle-class families. While in college, they meet through some common friends and hang out often as a group. Shwetha has a childhood friend Genni, who is very protective of her and often wards off the boys who try to hit on Shwetha, and Karthik's friend Jai on the other hand encourages him to fall in love. Karthik falls in love with Shwetha eventually, but he hesitates to tell her. On Shwetha's birthday, Karthik intends to propose her but when he hesitates yet again, Jai lets the cat out of the bag, and tells that Karthik loves her, but Shwetha rejects the proposal. After a series of pursuing and some serious drama like falling from a moving bus, Shwetha agrees to Karthik's proposal.

Genni advises Shwetha to avoid Karthik, since Shwetha is equally interested in Karthik, she conceals all the proceedings from Genni. But Genni happens to find out about them, and she confronts and Shwetha seems to apologize, but after Genni finds that Shwetha has made Karthik to overhear their girl talk through her mobile, she splits up from Shwetha and complains to Shwetha's mom that she is going out with some guy. Shwetha tackles her mom by blaming that she avoided Genni because is rotten in mind and is jealous. So to seek revenge, she must be doing this on purpose. Her mom gets suspicious but still believes Shwetha's side of the story.

Karthik and Shwetha continue to see each other. Soon one thing leads to another and they get intimate during overnight trips and outings. Within two months, Shwetha finds that she has missed her period, coincidentally her mom asks why she has not used her sanitary napkins and there are so many left overs. She manages the situation by telling that she used the pads from her friend's house when she stayed there.

Shwetha confides in Karthik and few other friends that she might be pregnant and they ask her to perform a self pregnancy test which turns out to be positive. So they go to some unknown place to abort the foetus posing as a married couple. But the doctor gets suspicious when they answer irrelevantly and chucks them out. They find another person who does the abortion through a hostel warden and learn that this new place is pretty expensive. Karthik, Shwetha, Jai and other friends try to arrange for money and finally on the day the abortion is supposed to be done, Shwetha vomits in front of her mother at her house. When her mom insists that they go to a doctor to check for food poisoning, Shwetha becomes restless and shouts at her. Her mom relates the unused pads and her vomiting and her behavior and realizes that she is pregnant and then all hell breaks loose.

Shwetha's dad speaks to Karthik's dad along with few relatives, and they argue. Shwetha's family, being on the receiving end want to finish the problem by getting them married. But Karthik's dad is not interested since his reputation will be spoiled. So, the lovers plan to elope and while they are on the way, Shwetha changes her mind and tells that her parents will feel bad. Karthik on the other hand tells that his parents will not agree for them to be together. They argue a lot and that forms a rift between them, but still they choose to stay together and return home. The families continue to argue about the marriage, and then finally Karthik's parents agree, provided Shwetha aborts the baby. But she refuses telling that the sole evidence will be lost and then again Karthik's parents will not get them married. Karthik tries to convince her, but it only leads to another argument and Shwetha walks off leaving an irate Karthik behind.

The parents also argue about the marriage and when some relatives speak ill about Shwetha and her character, (that she has acted like a prostitute and so she must take money for her services and not ask for marriage) Shwetha's father gets insulted and he leaves the place in tears. When Shwetha's mom knows this, she fights with Karthik's parents in front of their house, but Karthik has now changed his mind about marrying Shwetha because of the previous argument and he doesn't care anymore and is selfish and stone faced even when her whole family is in tears in front of his house. That is when Shwetha too decides that she doesn't want to be with Karthik anymore. And they leave his place.

Finally,a few months later a baby boy is born and Shwetha's dad leaves him in an orphanage. Two years later, we find that Shwetha is happily getting engaged to someone else, while Karthik is busy in a coffee shop flirting with another girl and the little child grows up in the orphanage without parental love and care.