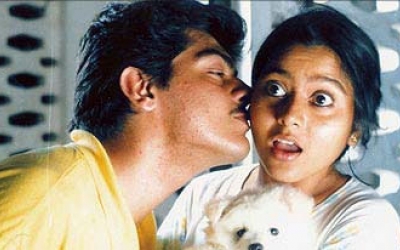 Yamuna (Suvalakshmi), one of the two daughters of an orthodox father, comes to Madras for finishing her studies. Major Madhavan (Prakashraj) is the husband of Yamuna's elder sister Ganga (Rohini), who infatuates about Yamuna after seeing a photo in a letter sent by Yamuna. Meanwhile, Yamuna meets Jeeva (Ajithkumar), in a city bus who gives his ticket to her as she had not taken her own. Later one day on the advice of his friends, Jeeva decides to express his love to Yamuna by writing 1 4 3(the number of letters in “I love you") in a letter and giving it to her. But he witnesses a group beating a boy who did the same thing. So he crumples the letter and it is found by Yamuna who realizes his love. One day when they were walking together Jeeva tries to remove the dirt from Yamuna's eyes and he kisses her. Yamuna is angry with him. Jeeva senses it and gets wet in the rain and gets a cold. Hearing this Yamuna meets him. Jeeva expresses that she is the only medicine to him and he needs her. Yamuna promises that she will marry him. On Yamuna's birthday, Jeeva jumps into her house and presents her a puppy. One day, fearing that Yamuna's father might not marry him to Yamuna, he decides to marry her in a register office on the advice of his friends. But Yamuna refuses and Jeeva leaves angrily.

Meanwhile Madhavan settles his father-in-law's debts and earns his trust. He also pays for connecting a landline to Yamuna's house and talks to her regularly. But his wife is unaware of this. One day Madhavan's wife finds it and starts to realize his true identity. Madhavan then expresses his love affair on Yamuna to his wife. This makes her so upset that she attempts to go and live with her father and Yamuna. Madhavan prisons her in home and one day he tells her that she can go to her father's house by flight and tricks her by putting a sleeping-pill in milk and makes her drink it. She falls unconscious. Madhavan then murders his wife by suffocating her to death with a polythene cover and tying it around her neck by his shoe-lace, and lies to everyone that she died from heart attack. He then makes Yamuna and her father stay with him in Delhi to look after his baby, but he has other plans.

Hearing this Jeeva comes to Delhi. One day he sees Yamuna who ignores him. Later he sees her carrying the puppy he presented and tells why she needs the puppy when she does not need him. Yamuna leaves the puppy in the middle of the road. Later that night Yamuna comes to take the puppy in the rain. Jeeva sees this and realizes that she really loves him. Couple of months later Yamuna's father (Poornam Vishwanathan) decides to get Yamuna married to Jeeva. This shocks Madhavan and he decides to stop the marriage between Jeeva and Yamuna. Yamuna's family meets Jeeva in a restaurant. While Jeeva was talking to Madhavan, a Singh dashes against him. And in the confusion Madhavan steals Jeeva's purse. Later when Jeeva senses his purse missing, he argues with the Singh. Later he suspects Madhavan and wants to check him. This angers Yamuna's father as he blindly believes Madhavan.

Later Madhavan arranges some men to pour liquor into Jeeva's mouth and lay him in the middle of the road. Madhavan makes Yamuna and her father believe that Jeeva is a drunkard. Madhavan later gives Jeeva's flight ticket and wants to send him to Madras. But Jeeva makes a fool of Madhavan by tearing the ticket and spends the day with Yamuna. In a rage, Madhavan makes his baby get wet in the rain and calls Yamuna to look for his baby. Meanwhile Jeeva complains to Captain Hariharan (Nizhalgal Ravi) who is a friend and higher officer to Madhavan, but he does not believe Jeeva. Later when celebrating Holi, Madhavan asks Jeeva the puppy he had presented to Yamuna. Jeeva gives it and Madhavan purposely throws it at a running car. The puppy dies and Madhavan makes everyone believe that Jeeva threw the puppy. An argument ensues between them and Madhavan tries to kill Jeeva with a rod but leaves him on behalf of Yamuna.

One day Hariharan finds the truth about Madhavan and questions him. An enraged Madhavan arranges men and kills Hariharan, faking it to be a car accident. Madhavan hides brown sugar in Jeeva's pillows and informs the police. Jeeva lands in Jail. One day while meeting Jeeva in jail, Madhavan tells him how he cruelly killed his own wife for getting Yamuna. Yamuna overhears this and informs her father. They plan to escape but Madhavan arrives and hits Yamuna's father with a lamp and holds her imprisoned in his house. Jeeva escapes from jail and arrives there. A fight ensues between Madhavan and Jeeva, in which Jeeva gains the upper hand. Yamuna and Jeeva take the baby to the hospital as it fainted. Yamuna's father locks the doors, opens the gas cylinder and lights a match stick in which they both die in the explosion. In the end, Jeeva is released from prison and is united with Yamuna and the baby.