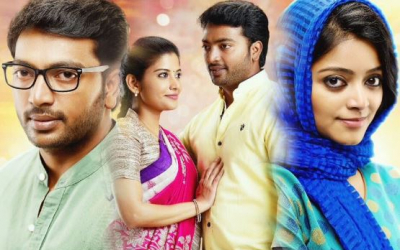 Varun Murali (Kalaiyarasan) is a well-known blind chef and the owner of a popular restaurant in Chennai. One night, Deepa (Sshivada) visits his restaurant asking for leftover food for homeless. Varun helps her and eventually falls in love with her daily visits. Meanwhile, Varun's close relative, Sadhana alias 'Sadhu' (Janani Iyer) approaches his parents and reveals her intentions of marrying Varun, which they accept.

Varun decides to propose to Deepa in his restaurant, but he observes that she is in tears. She tells him that henchmen were pressing for their money and her father had promised to return the money in three days. Varun promises to help out from his own savings. On the same night, Varun is met with an accident and is hospitalized, during which his vision is restored. He is treated for three weeks and the hospital fee is paid out of his savings. Varun feels guilty and is disappointed for not helping out Deepa. When he is discharged, he is unable to locate her. When his family presses him to marry Sadhana, he agrees as he also likes her from his childhood days.

Several days later, an old man walks into the restaurant telling how his daughter Deepa has been kidnapped as they were unable to return the money. Varun calms him down and hatches a plan to hand over his wedding jewelry, but is conned of the jewels by the kidnapper. Later, Varun gets to know that Deepa's father is found dead at Kanyakumari in a road accident. Varun decides to visit Kaniyakumari himself to get clarity about Deepa's family. He works with a constable Panju (Bala Saravanan) faking his identity, as a journalist investigating the road accidents where the victim remains unidentified. They decide to find the whereabouts of the old man, and they gather several clues on his hotel residence and phone number. These clues lead them to investigate the car that was involved in the accident and track down its owner as a blind man. After listening to his story, they get hold of photos of his girlfriend Vasundhara, and with Sadhana's help, they identify her as Deepa, Varun's ex-girlfriend.

They find out that Vasundhara is a con artist and selects only blind men. She makes the blind men fall for her and then presents a story with a need for money, which the blind men give. Varun and Panju find the commonality and pinpoint a list of potential targets. Sadhana, with help of her journalist associates, finds out the plan to con another blind man in Erode. They immediately travel to Erode and catch Vasundhara after several twists in the plot. The movie ends with Panju receiving commemorations from people for his efforts in nabbing the criminal, and also Varun weds Sadhana. Hence the movie shows us a Happy Ending.