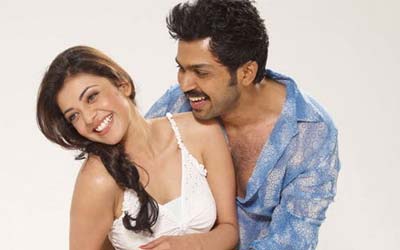 Azhagu Raja (Karthi), the only son of Prabhu and Saranya Ponvannan, owns an unpopular cable channel named "All In All". There are only two employees, one being Raja and other Kalyanam (Santhanam) in the TV channel. No matter what they do, neither TRPs nor revenues were improving. The hero, accidentally, comes across Devi Priya (Kajal Aggarwal).

Instead of trying to impress her, Azhagu Raja picks up a fight with Devi Priya when she sings a song at a marriage. Her weird singing songs irk him and eventually, makes him to express his anger on her singing abilities.

Sooner or later she realises that her singing is very bad.Finally the hero is proved correct as Kajal fails in every single thing she attempts, including suicide attempts. As they start liking each other, a flashback of Prabhu opens up.

It has to be noted that Karthi steps into Prabhu's story set in the 80s.Prabhu's flashback shows us that he was working with her grand father played by Nassar and he had left the job after he was insulted by him. Finally Karthi convinces everyone in the end.