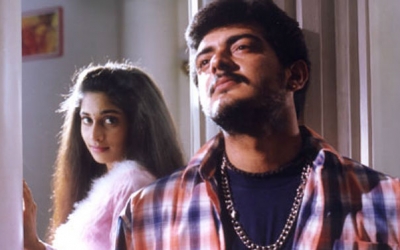 Vasu (Ajith), is a ruthless rowdy who lives in a cinema theater owned by Vinu Chakravarthy. He had a tortured childhood and wastes his days by drinking, fighting, and sleeping. It all starts when Vasu's friend Dhamu loses a reel of the movie Annamalai to Mohana (Shalini). Vasu and Mohana clash when Vasu attempts to retrieve the reel. Mohana's family are members of the police, headed by Birla Bose (Nasser), Mohana's father.
At this point, an ex-Mafia "Dada" who spent many years in jail because of Birla Bose, Tulasi Das (Raghuvaran), comes to the theater. He doesn't like Bose, and hires Vasu to kidnap Mohana. He cries out his woes in the song "Satham Illatha." Mohana falls in love with him, after hearing his pain.
When Tulasi Das realizes Mohana loves Vasu, he hires Vasu further to pretend he loves her back. At first with Vasu it's just pretend, but then, he too begins to love her. Tulasi Das visits Birla Bose to inform him of his daughters love for a gangster and realizes that Mohana is indeed his daughter. A flashback showing the parted friendship between the two men and Ganga Raadhika who is the wife of Tulasi Das abandons him and their child when she comes to know that her husband is a don. Knowing that Mohana is his daughter, Tulasi Das instructs Vasu to give up his love. When Vasu refuses, Tulasi visits Mohana and tells her about his ploy and that Vasu's love for her was fake.
Eventually Vasu proves to Mohana that his love was true and unites with her after a clash between the cops and some goons of the locality.