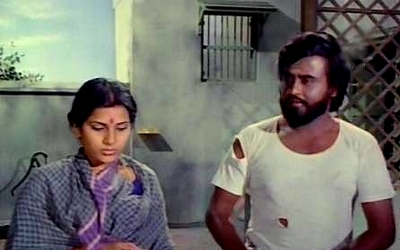 The story begins with a young boy, the eldest son of a poor widow barely able to make ends meet, doing odd jobs along with working at a printing press to provide income to his family and to provide education to his 2 younger brothers and younger sister, sacrificing his own education. He grows up to become Santhanam (Rajinikanth).

Due to his extreme poverty, his lover in the office (Sangeetha) leaves him for a richer man and he ends up marrying Lakshmi (Jayalakshmi), a poor girl. Being extremely poor, they could not even feed their children, let alone live comfortably. He keeps getting money from his friend (Cho Ramaswamy) for almost everything. His younger brothers, having studied and become rich, refuse to help him. His younger sister (Jaya), for whom Santhanam had spent all his money in order to conduct her marriage, treats him very badly whenever he goes to visit her. He is even fired from his job by his old employer's son who took over the press when the former becomes paralyzed after an accident.

Eventually, Santhanam leaves his house as he does not have money to pay the rent even after selling everything they had and he and his family move to a slum. Here he begins to write stories for a magazine in order to earn money. His wife dies due to a fire in the slum. Slowly he becomes rich as his stories were very popular.Santhanam becomes a famous author, his children are being sent abroad for higher education and his younger siblings begins to treat him with respect shortly before Santhanam dies at end.