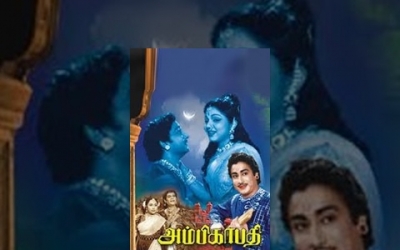 This story, passed on through centuries through traditional verse and folklore, dates back to the early 12th century during the reign of Kulothunga Chola I. The movie version of the story is this: Kambar, the kavichakravarthi whose name in enshrined forever as the author of Ramavatharam, the Tamil version of Ramayana, is a poet in Kulothunga’s court in Urayur. Despite his erudite scholarship, deep learning of Sanskrit and Tamil and extraordinary poetic skills, Kamban remains a humble, unassuming, deeply pious man, and a loyal subject of the King. All this earns Kamban a special place in the heart of Kulothunga who treats him with utmost deference and affection. Ottakoothar is another great poet in the King’s court, and Kamban’s ascent in the firmament and the King’s unabashed admiration for Kamban’s poetry has Ottakoothar simmering in jealousy.
It is in this backdrop that the love story blossoms. Amaravathi, the beautiful princess and Ambikapathy, the handsome and talented son of Kambar, fall in love. Ambikapathy is a bold, assertive and supremely self-confident youth, who even at that age, exhibits poetic skills equal to that of his illustrious father. Ottakoothar is doubly dismayed when he hears of this affair, for he had planned to bring about the marriage of Amaravathi with his stooge, Prince Kulasekharan of Vengi. With a brilliant, cunning mind at work, Ottakoothar sets about poisoning the King’s mind against Ambikapathi and contrives to bring about various situations wherein Ambikapathi might fall to disgrace. Luck seems to be on Ambikapathi’s side as he comes unscathed through these traps.
However, when Kamban discovers his son’s love for the princess and realizes the gruesome retribution that would undoubtedly follow, he pleads with Ambikapathi to give up his love. Meanwhile, Ottakoothar gets possession of a verse that Ambikapathi had penned as an ode to Amaravathi’s beauty and loses no time to showing the parchment to the King. The King is shaken by this clinching evidence of the love affair, and is determined to put it to an end. However, wishing to avoid any unwanted publicity and not willing to take any drastic measures, at the suggestion of Kamban, the King orders Ambikapathi to go to the distant Pushpaga Theevu, apparently to propagate the greatness of Tamil. A storm leads to the ship in which Ambikapathy is traveling being wrecked; and hanging on to a log, Ambikapathi is washed ashore in Shenbaga Theevu. Coming to know of the developments in Uraiyur, Ambikapathy hastens in disguise thereto.
With the help of Kannamma, the daughter of Pugazhendhi Pulavar, he succeeds in meeting Amaravathi, and they plan to flee to Shenbaga Theevu that night. But their plans go awry and both are caught trying to leave the palace. The King sentences Ambikapathy to death. But Amaravathi intervenes, claiming equal responsibility for whatever may have been the crime that Ambikapathi is said to have committed. In the ensuing argument, the King condemns Ambikapathi as sham poet who could write only verses that cater to man’s baser instincts. Ambikapathy is outraged at this slur on his poetic capabilities. The upshot is that if Ambikapathi could sing 100 devotional songs in succession, the King promises him Amaravathi’s hand in marriage. If he failed in this challenge, he would be executed forthwith. Amaravathi visits Ambikapathi in prison that night and urges caution. Ambikapathi laughs away her fears, assuring her that he is wholly confident of his own capabilities. A relieved Amaravathi says that she would be counting the songs, and would appear before him at the end of the ordeal.
The court assembles next day at the vasantha madapam, and in the august presence of the King, ministers and scholars, Ambikapathy commences his soiree with a short invocation to Saraswathi, the Goddess of learning. Amaravathi mistakenly counts this as one of the hundred songs, and so at the end of the 99th song, she appears happily in front of Ambikapathi to signal his victory. Overjoyed at sighting his beloved, and thinking that he has completed the hundred songs, Ambikapathy bursts into a verse in praise of Amaravathi’s appearance. Rising with grim satisfaction, Ottakoothar points out that only 99 devotional songs had been sung, and hence Ambikapathy has lost the challenge. Kamban’s anguish-filled plea for clemency falls on deaf ears, as the King orders the death sentence to be carried out. Ambikapathi is put to death, and the grief-stricken Amaravathi too falls dead… their souls unite in heaven.